Six Ways to Give Feedback Effectively 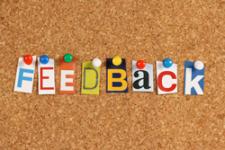 Several decades ago, I eagerly awaited my first performance review with my boss.  As a newly minted mechanical engineer, I desperately wanted to make a positive impression and validate the company’s decision to hire me straight out of school.  In my supervisor’s office, I sat nervously awaiting his feedback.   My boss, David, had been with the firm for over a decade and had done performance reviews with his direct reports ad nauseam throughout the years.  To him, this was just another discussion he’d have with one of the many snot-nosed kids this top-secret defense program had hired right out of college.

Without much flourish, David jumps into his feedback about my performance over the last year.  Immediately, I can tell that while this was special for me, it was just another day at the office for him.  I listened intently and took notes furiously hoping to catch every nuance in his commentary.  He began, as you’d expect, with the things I’d done well.  Fairly specific, though presenting a few new observations, I had previously heard most of what he was covering during our weekly one on ones.   Not much new, but good “confirming stuff” none-the-less.

Now we move on to my areas of improvement.

I nervously took a quick breath and steeled myself for what I know will be hard for me to hear - where I fell short.  Intellectually, I know it’s a necessary part of the process; but, emotionally, it’s hard for me to hear.  As he shifts in his chair and fidgets with his paperwork, I notice David is also nervous.  Looking across the desk, I can see that he has a fairly long list of issues.  Now I’m really starting to worry.

After what seemed like an eternity, David finally finished reviewing his list of my improvement areas.  I was stunned.   Most of it I’d never heard before - never mentioned, never discussed, it hit me out of the blue.  Without hesitation or thought, I asked him how long he had observed these shortcomings in my performance.  He casually replied, “For about the last six months.”   Stunned by his answer and in a state of disbelief, I shot back, “Then why didn’t you tell me six months ago?”

Clearly, people don’t take a job to fail.  In fact, reality is most people want to succeed.  The problem is, none of us are perfect.  Part of being human is making mistakes, not meeting expectations and sometimes falling short.  It’s because of this human mistakes and shortcoming that the skill of giving feedback is so crucial to the role of a leader and in developing people.  Without feedback, we often repeat the same mistakes over-and-over.  Though we don’t consciously choose to fall short of expectations, sometimes, in a new role, we’re unconsciously incompetent and unknowingly make mistakes.

Being an effective leader can be challenging.  Leadership effectiveness is also what we observe in organizations as the biggest differentiator in the overall performance of the firm.  If you’re interested in becoming more effective, contact us at Think2Perform.  We helped thousands of leaders, executives, coaches and individuals tap into more of their leadership potential.